I need all my wits about me today.  Be alert.  I do my homework; copious notes, a list of questions to ask (numbered) and an update to my arrhythmia graph.  I do all this because Annie is off on a ‘jolly’ for a couple of days with her daughter-in-law Emma, for a bit of female bonding and pampering.  So I am at the cardiology clinic on my own.

I am not good at these things; I tend to miss important points and have to catch up with Annie afterwards in the hospital car park; “oh is that what he said…?”

But today the pressure is on; not only will I have to listen attentively but also prepare a thorough report for when Annie returns in a couple of days.  Woe betide me if I miss anything crucial.

I put the hour and a half I spend sitting in the waiting room to good use; I ignore the latest copies of Saga magazine and Hello! and go over my notes.  When my name is finally called I am good to go.

It gets off to a disappointing start and then goes horribly wrong, like a train crash when the brakes fail and the bridge over the terrifyingly deep river has been blown away by the mad Colonel in Bridge over the River Kwai.  There is an inevitability about it all.  After it’s all over, I imagine marching back to the car-park whistling Colonel Bogey and wondering what I’m going to tell Annie.  (She’s probably whistling ‘Don’t come the cowboy with me Sunny Jim”.)¹

I’ll never know because fortunately(?) she is in the middle of Exmoor with no mobile signal (thank you phone fairy) so I have time to get my story straight.  I need to construct my report based around the only two phrases I can clearly recall the doctor saying;  (i) “you’re a fast walker” and (ii)“they keep bowling you bouncers”.

The train starts to come off the tracks as I walk to the consulting room.  The consultant cardiologist comes out, gives me a furtive nod of recognition and then disappears down the corridor.  Not good.  I am met instead by what seems to be a short, elderly gentleman – his name badge says specialist registrar – who greets me with phrase (i).  I don’t understand and he explains that I must be a fast walker because I appear to have walked the entire length of the corridor from the waiting room to the consulting room in the time it has taken him to get from his desk to the door.

I think I should say at this point, that I am neither height-ist nor ageist.  At 6’2’’ only about 5% of the male population are taller than me, so I’m height–conscious and at 65 I am well aware of the effects of age (on me and other people).  The reason I don’t understand what he says is because I can’t actually hear him.  There are two reasons for this; what he says is unclear and vague – and I am starting to experience serious hearing loss.  So I bend down and ask him to repeat it.  Just so you get the picture, here’s the original Mutt and Jeff.² And this sets the pattern for the remainder of the consultation. 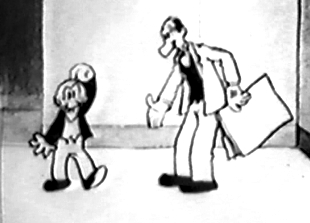 He apologises for the wait; he knows nothing of my case so catches up on his reading.  Inwardly I groan.  My preparation goes out the window – this was not on the list.  I’ve revised for the wrong exam.  He wades through my notes and then utters phrase (ii); again I don’t understand and cup my left ear and lean towards him.  He talks for a moment about cricket and appears to sum up my seven years of various treatments by referring to me as a resilient batsman who is still at the crease “in spite of all the bad balls”.

My emotions range from anger and frustration, through bewilderment and before finally settling on “oh well”.  I relax and resign myself to a consultation based on mutual confusion.  In retrospect it’s a bit more than that; I simply give up.  I see the whole thing as pointless.  We spend most of the time with him asking me questions, misunderstanding my answers, me repeating myself, then me not getting what he’s asking – and all the time he’s taking copious notes, scribbling all over my file, in the margins, then crossing out and starting again.  Having been under the care of this cardiology department since the lung resection in 2010, it seems as if we’re starting again.

There’s confusion over flecanaide (pill-in-the pocket).  He thinks I take it every day.  I explain it’s on an as-needed basis; i.e. each time I have an arrhythmia.  “How often is that?”  I’m about to get the graph out and show him that it varies – over the past six months or so it seems to be every 3 or 4 weeks.  But I think this will just confuse the issue even more.   So I try to explain, but get bogged down in the differences between elevated heart rate from exercise (which is normal and does not last long) and the episodes of arrhythmia when my heart rate will suddenly rise to, say, 100bpm for no apparent reason and then stay at that level – like an engine racing or a switch thrown – for hours at a time.   I am perfectly clear about the difference – I don’t take the flecanaide when my heart rate rises after exercise – I only take it when the throttle is stuck.

He also wants to know who prescribed it and how much I take; it was prescribed by the electro-cardiologist at Oxford when I had the ablation and the dose is 150mg.  (It’s all in my notes.  Twice now, as it happens).  It takes longer to clarify all this than it takes for you to read about it.

I wish Annie were here.  She still has her teachers’ hearing (and the ‘eyes in the back of her head’ – which she did not hand in when she retired) and would have sorted this out in a fraction of the time.  But she’s off enjoying herself and I’m in an episode of Mutt and Jeff where two people are divided by a common language.

He asks how many flights of stairs I can climb before I’m out of breath.  It seems this is a test.  I tell him I can manage two without much difficulty.  He’s almost dismissive – not in a rude way – he’s pleasant throughout the whole time we talk.  His yardstick seems to be one flight of stairs; if I can manage that without getting out of breath, then my AF is trivial in comparison with the other things I’ve had to deal with; it’s just a nuisance; “lots of people have AF” and as such my questions become irrelevant.  Which, in a way, is a good thing.  If my interpretation – and, more importantly, his – is correct.

And then I’m bowled out – I didn’t see this one coming; “we’ll see you in 6 months time”.   I pick up my bat and head back to the pavilion.  (I don’t actually follow cricket, I’m just entering into the spirit of things).  I’m due to see my GP in a couple of weeks and I’ll see what he makes of it all.

I’m embarrassed by the way it all went.  I explain to the doctor numerous times that I can’t hear him properly, but there are only so many times I can cup my ear.  It looks almost comical – as if I’m mocking him.  Which I’m not – I’m just desperate to hear.  His response is to repeat what he says – but in exactly the same manner so I don’t really get much of it.

I wonder if I’ve been dismissed by the consultant – that my arrhythmia is no longer serious enough for him to deal with.  But it’s a big deal for me.  I still have questions; why does it happen?  (OK – it’s paroxysmal AF, which by definition is sudden and unexplained).  Why does it vary in intensity? – sometimes it’s over in a couple of hours, at other times it can last all day.  And why is it so debilitating?  I know these are difficult to answer because that’s just the nature of the beast – but what I really want to know is if a pacemaker would solve the problem, rather than a lifetime of drugs and wobbles.  But that’s a question I never get the opportunity to ask.

I’ve ignored the deterioration in my hearing up till now; we’ve just bought a fancy soundbar for the TV because I can’t hear dialogue without turning the volume up to a level that would force General Noriega³ out of hiding (if he lived next door).  This device lifts speech above background sounds and music, so it’s audible at lower volumes.  I need something similar.  I feel I’m about to enter the world of the daytime TV adverts for things like chairs that eject you when you can’t get out of them without making a song and dance about it, or circulation massagers or those things they put behind your ear.  Where you get a free pen if you send off straight away – or is that life insurance?

Friends who read this might be surprised at this revelation; I confess that when I smile and nod my head vigorously during conversation I’m trying to hide the fact that I have not heard a single word you’ve said.  Annie has cottoned on though and will address a particular ear when she has something important to say.

I’m due to see Mr ENT in a couple of weeks for an update on the voice.  Perhaps he’ll do a 2-for-1 deal and sort my ears out at the same time as my throat.

¹ A song by Kirtsy MacColl

(i)   Cartoon characters created by Bud Fisher in 1907 and probably the first daily comic strip.   (ii)  A pair of people having dramatically different characteristics, such as height or nature.   (iii)    Also rhyming slang for ‘deaf’.

³ When dictator Manuel Antonio Noriega took refuge in the Vatican Embassy in Panama in December 1989, the US Army played loud music (Van Halen) to drive him out.  Which it did.

1 Response to Mutt and Jeff