the wizard of Oz

Friday 15th March, 3.00pm.  I’m cold.  The house is freezing, the weather’s miserable and I hear on the news that the odds on a white Easter have shortened.

Sunday 17th March, 3.00pm.  I’m warm.  I’m standing in the Indian Ocean, waves lapping round my feet.  We’ve travelled in a matter of hours, a journey that would have taken our forebears weeks or months to achieve.  This surely is Magic.  If that sounds too fanciful it is, at the very least, amazing. 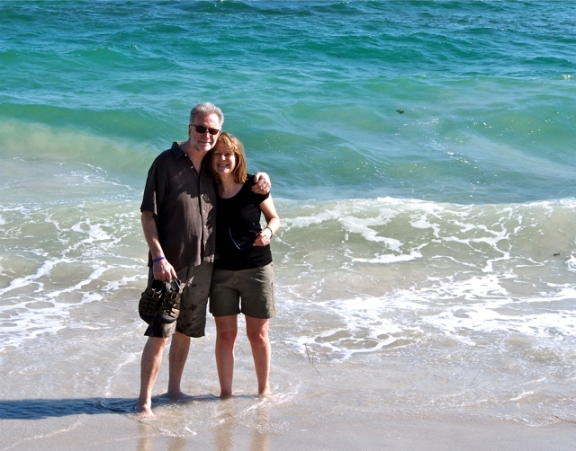 us in the Indian Ocean

It’s about 7 on Sunday morning by the time we finally clear customs and immigration and find Annie’s sister, Mary and husband Glyn, waiting for us.  It’s an emotional reunion for the two sisters.  Outside, as we make our way to the car, it’s already warm.  The sky is blue and I’m momentarily dazzled by the unfamiliar golden orb in the sky.  The drive from the airport to their house takes us past the ocean.  Alongside the road is a paved area and it’s packed with walkers, runners and cyclists.  The M25 has nothing on this.  The more impatient roadies, with their stream-lined helmets and carbon framed bikes, clog the road.  There seems to be hundreds of them.  Is it a race?  Can’t see any numbers so just assume this is confirmation of the image we have of the Australian life style – sports mad – and living by the sea.

The houses alongside the ocean are extraordinary – enormous glass and steel structures making the most of the view.  Every single one could feature in an episode of Grand Designs.   This is what happens when Chinese industry meets Australian ore.

An hour later, we’re sitting on M&G’s front porch, shorts and tee shirts, (I did wonder if I might ever wear such things again) drinking coffee and watching an exotic bird feeding from an exotic flower.  CancerWorld seems a million miles away.

Later that day we drive a few miles up the coast to a picnic area for a barbecue.  It’s a bit like an Antipodean version of Alice in Wonderland.  A herd? (party?) (flock?) of Kangaroos play on the grass; the birds are all the wrong colour and their songs are nothing like those at home.  For us Brits brought up on books and television programmes about Australia, there is though, a familiarity about the unfamiliar.  Until we see it in the flesh.  I think about the early visitors to this place and wonder what they made of it.

There’s a special enclosure a short distance from the picnic site and the light is starting to fade as we wander along an elevated, fenced off, walkway.  Then we see it – asleep high in a tree, a Koala bear.

We’ve been in the country for less than 12 hours and we’ve had the full Australia package – a paddle in the ocean, a bbq, kangaroos and koalas.  I tell Glyn we can go home now, we’ve done it all.  “You haven’t heard the banjo frog”¹.  I assume this to be a wind up – frogs playing the banjo?  Or an aussie variation of the anti-banjo jokes so beloved by British musicians; e.g., definition of a banjo with perfect pitch – when you can toss it in a skip without touching the sides.  That sort of thing.  But no; as we walk back to the car I hear a  strange metallic ‘bonk’ – like the plucking of a string.  It’s not the theme from Deliverance – but it would not be out of place on Britain’s got talent.  I decide it might pay to be somewhat respectful towards this creature; it has, apparently, poisonous glands in its thighs.  Unlike their human counterparts who only inflict pain with sound.  (With apologies to banjo players everywhere).

It’s day three and I’m sitting on M&G’s front porch as I write this.  About a mile away, through a gap in the trees, I can see the Indian Ocean.  The house is a modest bungalow, surrounded by modest bungalows.  Immediately in front is a park – a playground for children, surrounded by well-manicured grass, planted with what look like well-manicured trees.  People jog or walk their dogs while others ride their bikes.  It’s clean and neat; the people are clean and neat.   There are three predominant colours in this landscape; the blue of the sky, the green of the grass and trees and the pinkish-red of the paths and roadways.  I keep thinking I’ve seen it all before and it eventually dawns on me that this could be the film set from The Truman Show.  Or how a developer – or a child – might picture their ideal town.

Like all communities there must be a darkside.  We hear what have become universal stories about young people and drugs and the latest local fear, a white van that is snatching dogs for illicit fighting.  I give Milo, M&G’s chocolate labrador, a reassuring look when I hear this.  Right now, it’s hard to imagine anything bad happening here.  It’s as if someone has lifted a corner of the artificial lawns that seem to front the new housing developments and swept it all out of sight.

I’m under the spell of this place.  The wizard has done his stuff.  If things had been different I could have been quite happy here.  What’s not to like?  I know there are downsides – it’s too hot (and getting hotter) in summer, it’s a long way from friends and family (and John Lewis says Annie) and there are things in the sea that want to eat us.  But the lifestyle appeals; we pass a hoarding advertising a new housing development; ‘surf at 7, work at 8, that’s what life’s all about’.  Annie’s youngest, Dan, currently working in Melbourne, wants to stay.  I can see why.

I can’t help thinking that the Judiciary, back in the 18th and 19th centuries got the whole transportation thing wrong.  Instead of sending the bad guys off to to Australia, they should have said “we sentence you to stay here in the cold and the rain – the rest of us are off to live in the sun”.

4 Responses to the wizard of Oz