If the nurse comes in … part 3

I’m getting stressed – every single car park, and there are five at the Churchill in Oxford, is full.  Not just full, cars are queuing, backed up round the ring road.  We do a circuit but it’s hopeless.  I’ve never seen it like this before.  In the end I join others and park on the grass verge.  If I get a ticket or a wheel clamp, then so be it.  Today my mind is on other things.

It’s usually a long wait.  We pass the time either in companionable sniggering or silence, lost in our own thoughts.  Today my mind has gone walkabout and taken me to ‘aging’.  I feel I’ve aged – what? – about 7 years since I first got sucked into CancerWorld.  Which is uncanny given it’s been 7-odd years ….

What I mean is that in my head I am still 58.  And fit and healthy.  While there are advantages to this state of mind – positive thinking and all that – there is a downside.  I have a tendency to make plans that my body has no intention of going along with.  In fact it would probably run a mile at the very thought of some schemes that I dream up.  If it could run a mile, that is.  I’m planning a trip to the Pyrenees in September.  With bike.  Three flights of stairs is about my limit right now – so just what makes me think I can get up a mountain, I have no idea.  Although I did climb a 200 step tower (or 222 steps as a 9-year old pointed out as he raced past) in the Australian Bush – at 35°C – with only 3 stops to catch my breath.

We’ve just laid a new wooden floor in our sitting room.  I say we.   I give the orders and helpfully point out where they’re going wrong, while Annie and a builder friend do the easy bit.  But prior to this I decided it would be a good idea to bury TV cables, the phone cable and sundry other cables, under the old floor before laying the new one, in the interests of neatness.   It took me all day to do something that should really have taken no more than a couple of hours at best.   I could hardly walk the next day – all the squatting and levering away at 40-year old nails, stuck in 40-year old joists having reduced my quads to jelly.

I can’t decide if this is simply old age creeping up (Doctor: “You’re not as young as you used to be”), or if it’s the effect of cancer treatment.  Given that in my head at least, I’m living 7 years in the past, I like to think that it’s simply the cancer treatment.  I’m not ready for the alternative.  Besides – old age is no place for sissies¹.

I lean across to Annie and say, “ I’m feeling a bit past it”.  “Past it? – You’ve never even been level with it.”  She laughs and repeats herself just to make sure I hear.

People who know my wife will testify that her sense of humour is straightforward and uncomplicated.  While she enjoys the sophisticated wordplay of people like Eddie Izzard and Bill Bailey, her favourite joke – the one guaranteed to have her rolling on the floor, tears streaming, her children a picture of silent distain and embarrassment as if to say “are we really related to this woman?” – is ….

…. in fact the unfunniest, most miserable person in the world could tell this joke and she’d be in convulsions – like in From Russia with Love when Rosa Klebb is interrogating James Bond;

Rosa Klebb “Now Mr Bond, I will ask you one more time – what’s brown and sticky?”

James Bond “I tell you I don’t know”

At this point the audience gasp in horror at James Bond’s inability to deliver the punch-line, as they realise his future as a straight man is clearly over.  But Annie is rolling in the aisles, holding her sides…..

Of all the jokes in all the world – including those in Christmas Crackers yet to be pulled – my wife regards the ‘brown stick’ joke as the apotheosis of comedy.  This is the daddy – nothing can surpass it.  Perhaps her vocation – teaching Maths – is partly to blame.  Most teachers I know are a bit odd.

She caused a scene recently in the Art Gallery of Western Australia in Perth when an exhibit caught her eye.  Grabbing my arm, pulling me towards it, all the while pointing, pointing – stabbing the air in excitement as if she couldn’t quite believe such a thing possible.  Her favourite joke – for years nothing more than a mental construct – has suddenly taken material form. 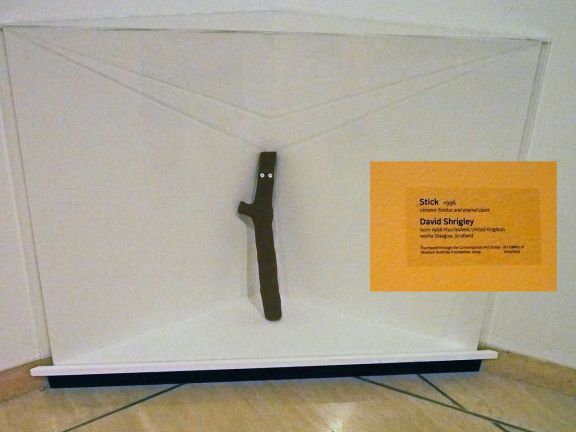 The only other thing I can imagine having a similar effect is James Taylor calling her on stage while he sings just for her.  I get a glimpse of my wife as a teenager.  And realise that, perhaps, this is what art galleries are for.

She’s not unsympathetic to my sense of years passing – but she does come down on the side of the doctor; “You’re not as young as you used to be.”  I tell her that I feel better than I have done in ages – it’s just the sudden exhaustion and tiredness that comes over me when I do anything physical that I find frustrating – and confusing.  And I explain about the Pyrenees – what was I thinking?  She smiles;  “We can always look at them from the bottom.”

She then brings me back to the here and now with a bump; “you could be dead. Mr S (lung surgeon) could have left you to die.  When he was deciding to operate or not – I saw it cross his mind.”  She delivers this brutal recollection in a matter of fact way, as if we’d been talking about pruning the roses.  “I can say this now – I couldn’t then.”

And she’s right of course – I’d forgotten.  We’d sat in the surgeon’s office on a hot stuffy day while he made up his mind; he explained that because of the location of the tumour it was probably too difficult to remove and I had to argue that I was willing to take the risk.  He even phoned a friend for a second opinion.

She rests her hand on my arm; “even if you have lie on the sofa for half a day, it’s still better than the alternative”.  I ponder on this until my name is called.

Which it is – and much sooner than expected.  No checking my weight first.  Odd.  It’s a young doctor and there’s no nurse.  As we walk down the corridor to the consulting room I’m thinking this must be good, but I can’t catch Annie’s eye.  He gets to the point straightaway; “there’s no sign of the disease on your scan”.  The hot spot in my abdomen appears to be shrinking.  Still no clear idea what it is, but it’s going the right way.  We have a very brief chat about my general health and then I’m on my way, with an appointment for another scan in October.  That must be the shortest consultation ever.  On the way out Annie grabs my arm, “I’m clicking my heels..” ²

As we walk to the car, the ring road is still backed up.  No ticket or clamp, just a dirty look from someone queuing to get into a car park.  Annie doesn’t care; “another 6 months of freedom, yay”.  It’s almost 3 years to the day since we discovered the tumour in my lung.  And I’m still alive.  Yay.

¹Attributed to Bette Davis, but quoted by many others.

4 Responses to If the nurse comes in … part 3